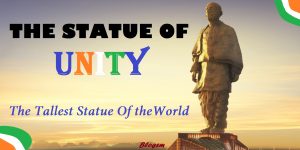 ‘The Statue Of Unity’ is a giant 182 meter tall statue made to tribute Sardar Vallabhbhai Patel. The big monument stands on the islet of Sadhu Bet near the Sardar Sarovar Dam in the district of Narmada in Gujarat. The inauguration of ‘The Statue Of Unity’ is going to be done by the Prime Minister of India, Shri Narendra Modi on 31st of October 2018 (today) as it couldn’t have been done on a day special than this as it is the 143rd Birth anniversary Of Sardar Patel.

The monument is the tallest statue in the world. It is twice the height of the Statue Of Liberty, USA. It is built on Sadhu Bet near Sardar Sarovar Dam because it was first thought by Sardar Patel to build a Dam over river Narmada and fight the water problems of the state and it’s neighbouring’s.

Some of other major attractions include inauguration of a 17-km-long Valley of Flowers, a tent city for tourists near the statue and a museum dedicated to the life and times of Sardar Patel.

The statue has been built using over 70,000 tonnes of cement, 18,500 tonnes of reinforcement steel, 6,000 tonnes of structural steel and 1,700 metric tonnes of bronze, which was used for the outer cladding of the structure, according to the government statement. Idea to build such a monument was of the Chief Minister of Gujarat, Shri Narendra Modi in the year of 2013, when he was the Chief Minister of Gujarat. The total cost of the project was estimated to be about ₹3,001 crore by the Government of India. Larsen & Toubro were given the contract for the designing, construction and maintenance of the Statue. The Construction was started on 31st October 2013. 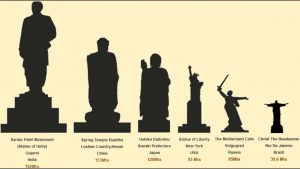 The monument has gained support as well as critics. The construction of the statue was opposed by some tribal groups of Narmada District. While the local tribal people to boycott the inauguration ceremony will observe ‘black day’.

Apart from everything, the statue is now one of the Landmarks of Gujarat. ‘The Statue of unity’ would attract numerous tourists as it has the very unique 17 km long Flower valley, a large museum and a Tent city for the tourists to add the beauty. Also, a spot at around 130 meters up inside the statue has been made for the visitors to view the landscapes of the surrounding and the Sardar Sarovar Dam.

Find Us at Social Sites

Indian Rupee getting weaker against US Dollar

Petrol and Diesel Will Become Cheaper by Rs 2.50 per litre

Petrol and Diesel Will Become Cheaper by Rs 2.50 per litre   Finance Minister Arun Jaitley today announced marginal relief for citizens from runaway fuel prices with excise duty cut of Rs. 1.50 and another Re 1 Read more…